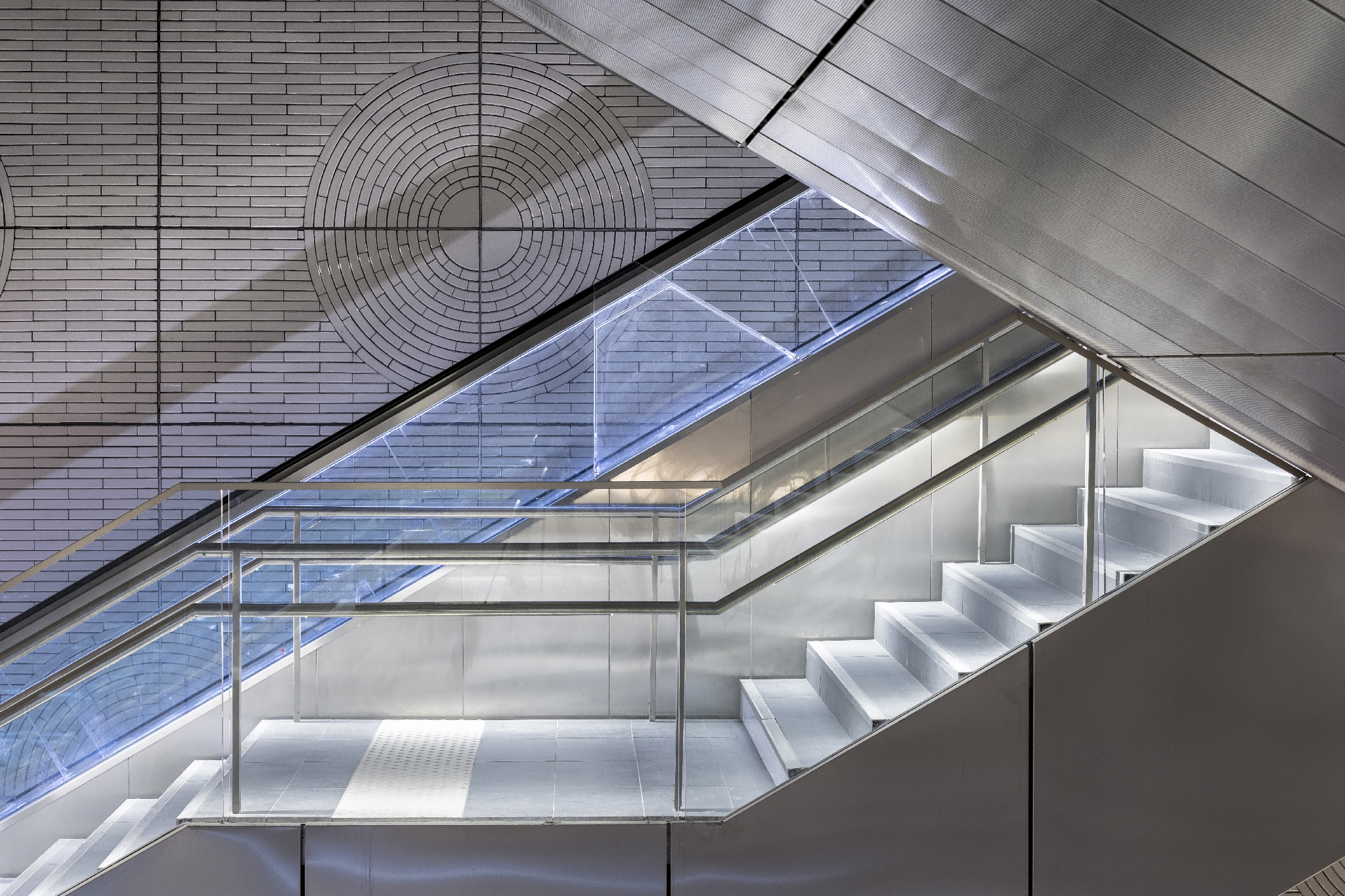 The core of the archbishop's vocational college's design, which won the competition, is an organically shaped atrium, which is intended to act as the heart of the building, traffic area, meeting place, auditorium and light space. Here, the flanking gallery walls were faded in using continuous, concealed grazing light profiles. They make it possible to experience the room in all its complexity from all perspectives.

Organically shaped recesses in the beams of the atrium galleries are filled with so-called "seals". These wooden bodies with round cut-outs accommodate adjustable track spotlights. They illuminate the floor area of the atrium and the sculptural stairs in a glare-free and high-contrast manner. Open learning zones form semi-private niches in the atrium galleries. Some of these are equipped with elaborately designed multifunctional furniture, which is cleverly surrounded by recessed ceiling lights.

The classrooms are illuminated with continuous, slim lines of light. These follow the polygonal facade outlines in three lanes and thus illuminate the classrooms in a uniform and at the same time glare-free way. The light trail follows all changes of direction with mitres illuminated right into the corners. In this way, the lines of light can also be read from the outside as spatially staggered outlines. The café on the ground floor presents itself with its staggered wooden ceiling fields, which are optically separated from each other by LED light. The functional room lighting is provided by recessed directional spotlights which, thanks to their design, compensate for the inclination of the ceiling and at the same time bring concentrated, brilliant light onto the café tables.

In the library, the shelf lighting planned by the interior design firm Keggenhoff comes entirely from the furniture. Only in the edge area, along the generous facade glazing, are the reading areas illuminated again by downlights in a Heradesign ceiling.

The escape stairwells are illuminated by LED light strips in exposed concrete recesses. On the underside of the stairs, the light lines form an uninterrupted light graphic and functional element. The lines of light are largely hidden along the end walls of the platforms and illuminate the designed walls with grazing light. The outdoor lighting pillars are kept at a suitable distance from the façade. Benches contain grazing light for the paths near the facade and selected trees are illuminated from the ground without glare.

With LEDLUX LS linear, InstaLighting supplied the modular LED line system with which all light lines in the atrium, learning zones and emergency stairwells were implemented. Due to the compact design and modularly configurable length, the LEDLUX light inserts fit perfectly into the existing architecture and enable seamless lines. 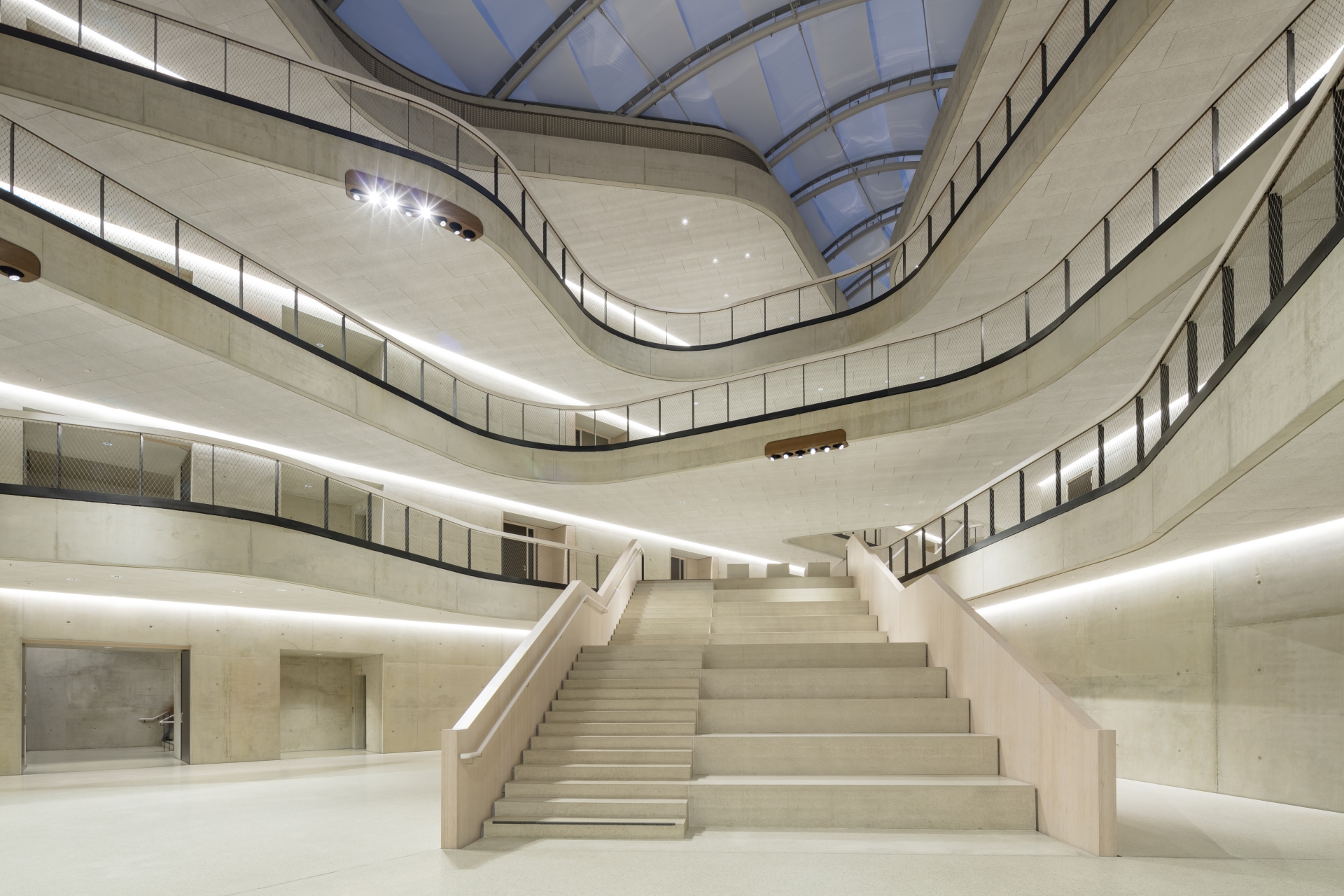 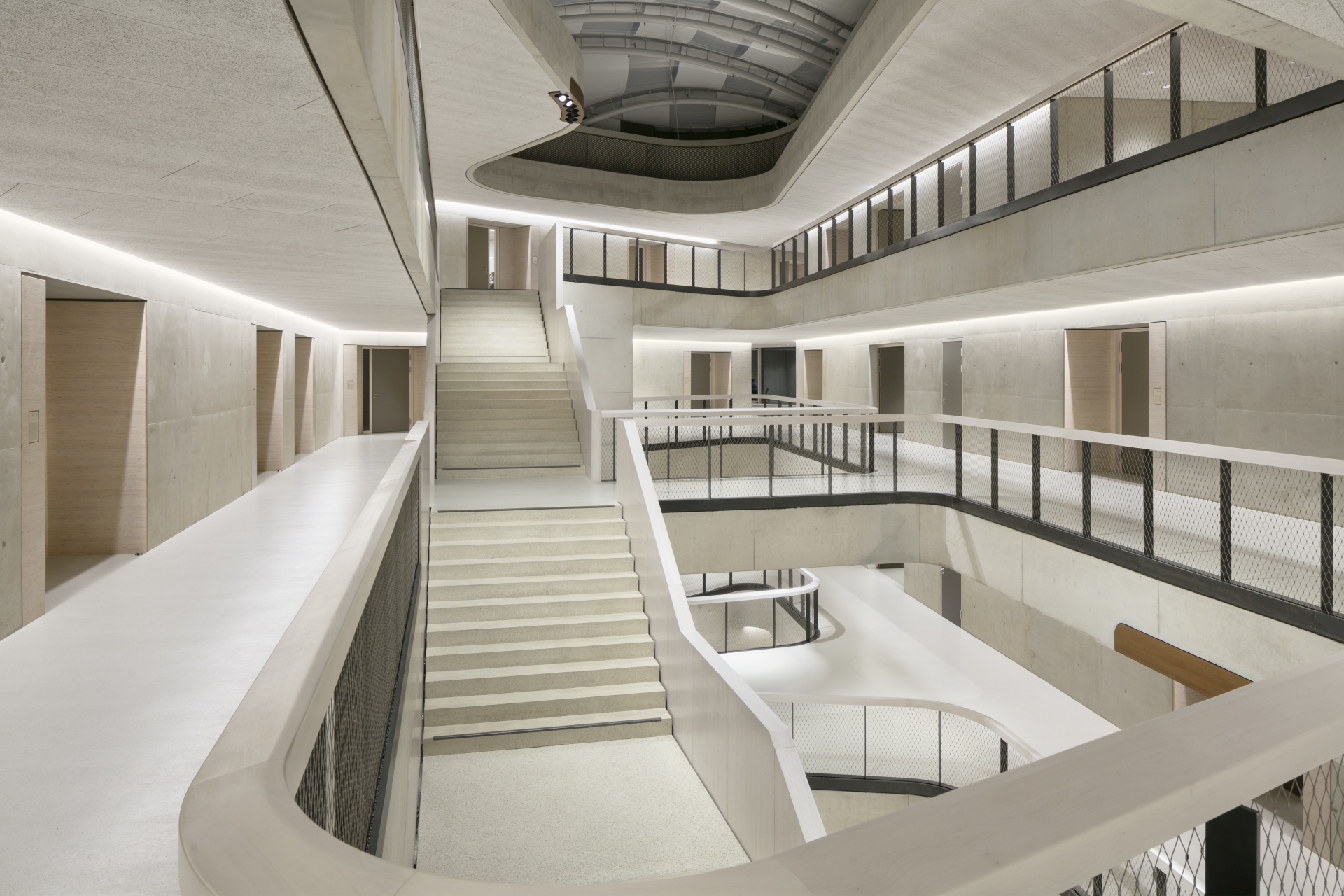 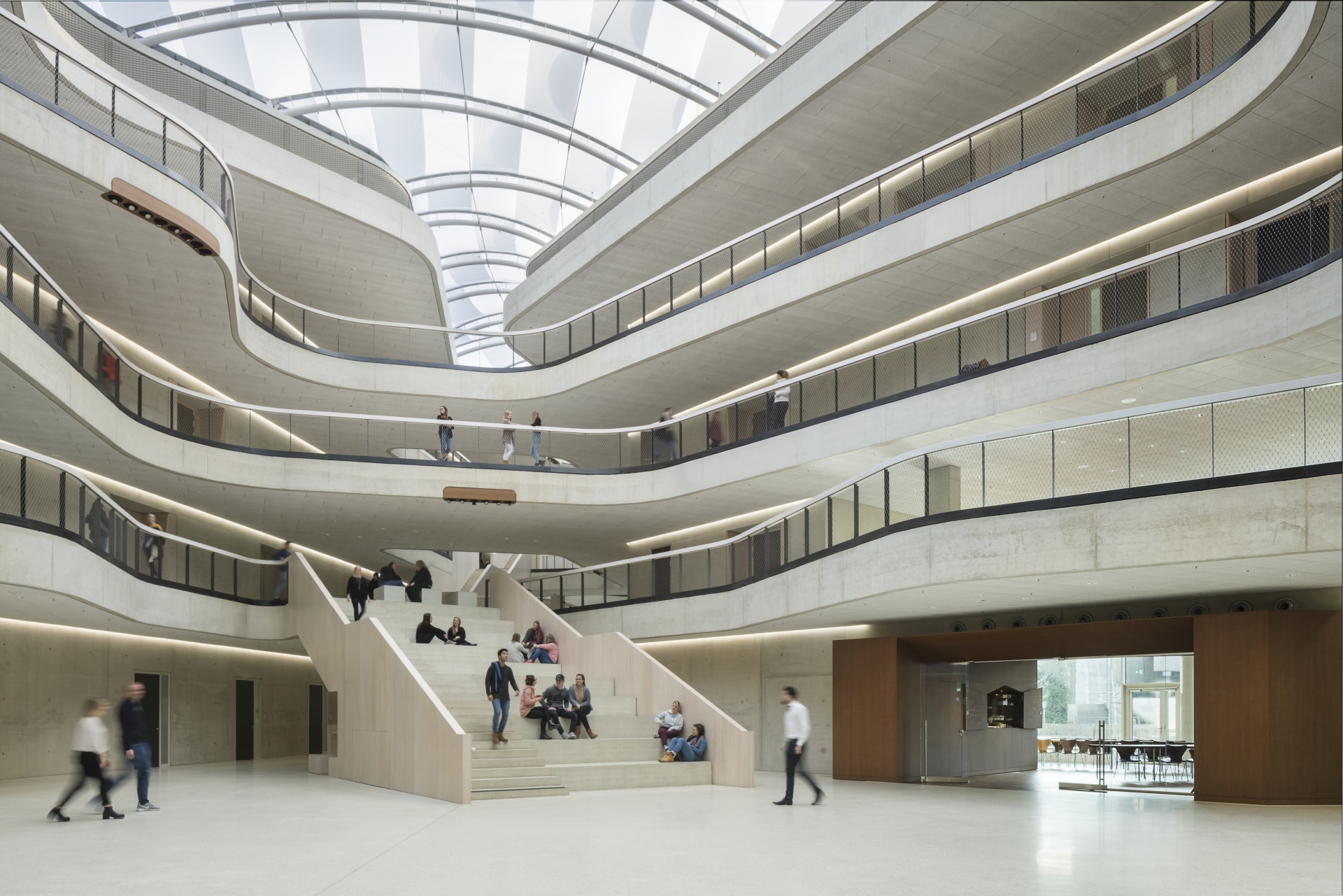 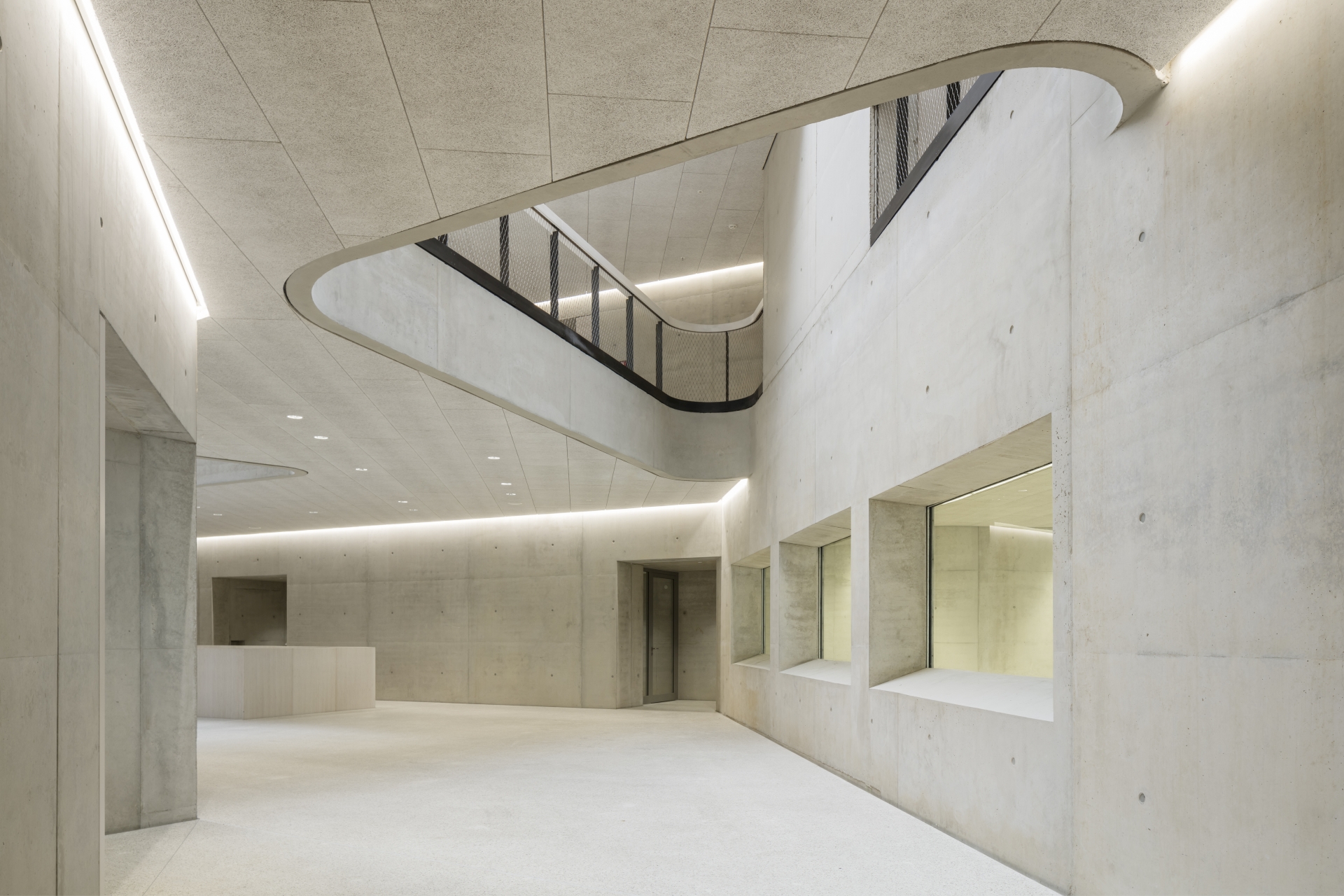 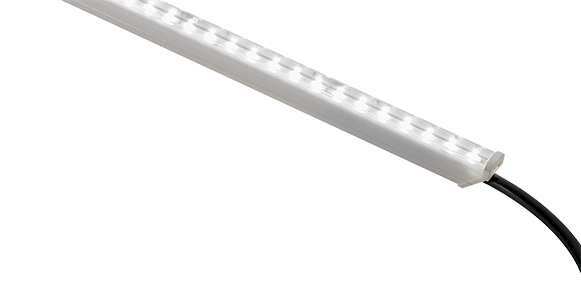